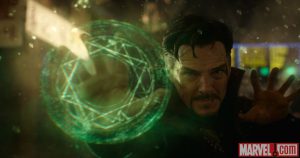 The British invasion of Hollywood has continued with the arrival of a handful of top talent in the Marvel Cinematic Universe with the latest instalment of the ongoing storyline.

The latest actors to appear in this juggernaut series are experienced and talented people such as Chiwetel Ejiofor, Tilda Swinton and Benedict Wong.

The two headline stars are Benedict Cumberbatch and Danish actor Mads Mikkelsen who face off as the titular Doctor Strange and the antagonist Kaecilius.

Cumberbatch puts an American twist on his Sherlock persona and effortlessly fits into the role of highly intelligent and no less overconfident to the point of arrogant neurosurgeon Doctor Stephen Strange who is brought down to earth by a career-ending accident and goes on a journey to find a cure.

Taking strong inspiration from Batman Begins, Inception and The Matrix but squeezing it into a running time of around two hours, we see the usual mix of humourous asides, in-universe gags and mentions for Marvel fans, and a decent storyline which isn’t afraid to take risks towards the end.

Marvel fans might find themes within this film taken from 2008’s Iron Man but Doctor Strange is another example of less well known Marvel properties such as The Guardians of the Galaxy or Ant Man becoming hits thanks to good writing and excellent marketing.

While other Marvel films have plenty of running, jumping and shooting, Doctor Strange takes care of the mystical and metaphysical side of the Marvel comic book films with a well scripted plot which unfortunately doesn’t allow enough screen time to Mikkelsen’s Kaecilius or Rachel McAdams as Strange’s friend Doctor Christine Palmer.

There has been some controversy over the casting of Tilda Swinton as “The Ancient One” – Doctor Strange’s teacher – but the changes to explain the character’s apparent changes in race and gender from the comic book version made sense in the context of the story.

Benedict Wong’s character, Wong, is given more screen time than expected and is also modernised and given some of the film’s most entertaining moments.

In fact, despite the relatively short running time, the ending was intelligently written and makes sense considering some of the psychedelic special effects sequences which will make the film a strong contender for Oscar recognition next year.

There’s also the obligatory post credits scenes, and you get two in this one, which appear to set up yet more forthcoming films.

Comparing to the mess which was rival DC Comics’ Suicide Squad and Batman v Superman earlier in the summer, however, this film is well worth checking out.