This film is likely to get overlooked as the juggernaut that is Office Christmas Party rolls into town in the week before the latest Star Wars film – Rogue One – likely sweeps all before it.

While Jennifer Aniston’s comic chops may stand out in the aforementioned Office Christmas Party, the rest of the stellar cast looks wasted on a decidedly silly comedy. 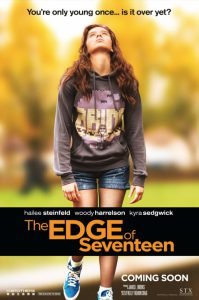 The Edge of Seventeen Film Poster

Why not, instead, try and find a cinema still running The Edge of Seventeen?

Yes, it’s labelled as a teen comedy but don’t be fooled into thinking it’s The Breakfast Club with smartphones and social media.

It’s neither as stylised as John Hughes’ masterpieces of the genre nor as gross-out or low rent as more recent films in the comedy genre.

Instead, it’s an engaging and authentic seeming drama with snappy dialogue, a sense of humour and, more importantly, plenty of depth and truth in the main characters who quickly grow beyond what may be initially seen to be stereotypical ciphers.

It’s therefore a film that’s not afraid to take risks by todays standards and, for a film helmed by a first time writer/director – Kelly Fremon Craig, is well worth supporting.

Nadine has an exasperated mum, Mona (a fantastic performance by Kyra Sedgwick), a popular and sociable brother Darian (Blake Jenner), but is still affected by the loss of her beloved father to a heart attack years ago which seems to spiral her into bouts of depression.

So far so ordinary, until Krista falls for Darian in a move which threatens their relationship.

Feeling lost, Nadine turns to her history teacher, Mr Bruner (a very laid back, but also avuncular Woody Harrelson) for some intelligent banter which she can’t find in most of her contemporaries.

She also tries to expand her social circle with faltering encounters with artist Erwin (Hayden Szeto) who clearly likes her more than she initially likes him.

Nadine also has excruciating and fumbling attempts to hook up with older school bad-boy Nick Mossman (Alexander Calvert), but also has to deal with her mother who is overly concerned about her poor reaction to her brother and best friend getting together.

While some of these tropes may seem familiar there’s more depth to all the main characters and a satisfaction in the way the story arcs are concluded with plenty of emotional heft.

The film itself ends on a hopeful note but still serves to underline the great performances which easily lift this film above lesser examples of the genre.

If you can’t catch this at the cinema, it’s well worth a rental or a purchase in a few months time – it’s going to be an award winner.

Summary: THE EDGE OF SEVENTEEN is a US drama about a teenage girl who is mortified when her best friend starts dating her older brother.