Moana is an ocean of Disney musical fun

Moana is the latest Disney animated feature and it’s directed by Disney veterans John Musker and Ron Clements who were responsible for early modern classic films from the Disney stable including The Little Mermaid (1989), Aladdin (1992), Hercules (1997) and the generally overlooked The Princess and the Frog (2009).

It’s a self aware film with a rich heritage of musical numbers behind it, engaging and easy to follow plot and plenty of comedic moments as you might expect from modern Disney animations. 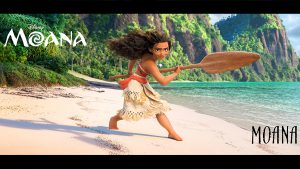 The lead character, a young girl with dreams of venturing beyond the confines of the island where her Polynesian people live is forced out into a wider world to save her people after their island life is threatened.

Accompanying Moana, a Disney princess in everything but name, is a very dumb scrawny rooster and a charismatic but slightly buffoonish demi-god and they come across all manner of sea-bound challenges along the way. 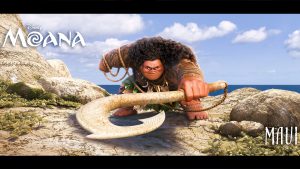 The film is a colourful and lush vision of the south seas, very welcome in winter, and the quality of the artwork is astounding with particular attention paid to the sea, which in parts becomes a character itself, and especially the hair on both of the main characters and how it interacts with water.

Even the tattoos on Maui, Dwayne Johnson’s hilariously confident and charismatic demi-god, become a character – just about the only part of the film that is animated using Disney’s hand-drawn process. And yes, that is Dwayne Johnson, possibly Hollywood’s most bankable star today, singing!

Thankfully, the top notch CGI doesn’t detract from the plot, which is easy enough to follow for youngsters, is funny enough to keep people of all ages engaged, and with surprisingly plenty of characterisation between the comedic and dramatic set pieces.

A hit musical hidden inside a hit animated movie

As with Frozen (2013), there’s several memorable songs co-written by Lin-Manuel Miranda – a famous Broadway hit writer most well known for the musical Hamilton – although nothing quite topples “Let It Go” as performed by Idina Menzel in Frozen.

This film has one song which get very close to Menzel’s song including “How Far I’ll Go”, which is sung by Auli’i Cravalho – who plays Moana – who only turned 16 just before the film was released in the US. 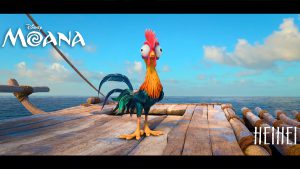 Although it’s unashamedly a Disney musical, this film not afraid to poke fun at itself, lampshading the fact that Moana appears to fit the Disney princess stereotype, and having a villain in the film pre-announce his intention to sing partway through the action.

There are some possibly sad and scary moments mainly towards the end for the very young in the audience, but there’s much to praise for a very uplifting and funny film.

Stay till the end of the credits, Marvel style, to catch an amusing little coda with a callback to an earlier Disney movie.

Summary: MOANA is an animated feature about a young girl who ventures out to sea on a mission to save the future of the people of the Pacific island on which she lives. The feature is preceded by a short animation called INNER WORKINGS which is about the internal struggle between a man’s pragmatic and impulsive sides.