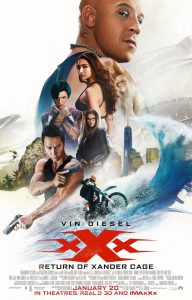 Fortunately, with a string of successes in the Fast and the Furious franchise behind him – not to mention a popular turn as Groot in The Guardians of the Galaxy, Diesel was persuaded to return for another belated sequel.

In hiding after being declared dead for over a decade, extreme sports spy Xander Cage is called back out of retirement after a piece of hardware capable of crashing military satellites into the ground causing massive terrorist destruction is stolen.

We get a pre-credits sequence dedicated to reintroducing Xander Cage who proceeds to smirk his way through some fairly lame expository dialogue in scenes which aren’t exactly the most feminist in nature.

So far, so Roger Moore, but as the original film was keen on lampooning the pre-Daniel Craig Bond this latest instalment isn’t afraid of borrowing liberally from the long-running series.

Also joining up are Manchester-based UFC fighter Michael Bisping, model Ruby Rose, singer Kris Wu, Rory McCann (Game of Thrones), and Nina Dobrev (The Perks of Being a Wallflower) amongst many others.

Despite the large cast, each character gets their moment to show off their special trait and, refreshingly for this genre of film, there’s not too much in the way of stereotyping where the nationalities of the characters are concerned.

Unlike Suicide Squad, this isn’t a po-faced action flick with an incoherent plot and doesn’t take itself too seriously although it’s quite strange to see Barcelona striker Neymar make an appearance.

It’s a pity there was no eye-opening action sequence to rival the free running opening from 2006’s Casino Royale.

For a film littered with martial artists it was a shame there wasn’t quite enough fisticuffs alongside the inevitable firefight at the end, leaving the likes of Tony Jaa with relatively little to do once the guns start blazing in the final act.

There’s a few significant callbacks to the previous movies but this isn’t just a box ticking exercise, it’s a youth skewed action film and you should leave your brain at the door, sit back, and enjoy the (preposterous) ride if you’re tempted to see what is definitely a boys film.