Manchester by the Sea and other Oscar contenders for 2017

It’s Oscars weekend, and by Monday morning we’ll find who who has won the award for Best Picture.

It’s a very competitive group of films in the running for victory this year with La La Land leading the pack.

La La Land is still on at cinemas and is many people’s tip to win the statuette.

Damien Chazelle has crafted a beautiful looking film which has taken risks by daring to have musical elements wrapped around a romantic drama which takes risks with the ending.

It might not be to everyone’s taste – a backlash has already started in some quarters – but it’s certainly a film worth watching in my opinion.

Hidden Figures and Moonlight – Oscars not so white

There’s also notable mentions for Moonlight, which has had stellar reviews although I haven’t seen it, and is many critics’ choice for the Oscar.

Out at the same time as Moonlight was Hidden Figures – the untold story of black women in NASA’s space race in the 1960s. It’s a neatly packaged, well constructed film which does a superb job of telling the tale.

Manchester By The Sea 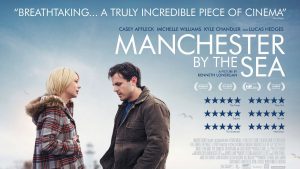 Manchester By The Sea film poster

One film which has largely disappeared from the cinemas but is an outside bet to win the Best Picture Oscar is Manchester by the Sea.

It’s is a powerful study of grief, regret and guilt with a superb script that’s not afraid to throw in some moments of well judged humour to lighten the atmosphere.

Controversial actor Casey Affleck delivers an intense performance in a film which is as tonally grey as the Massachusetts town which his character Lee, a Boston-based caretaker, who has to return to following after his brother has a medical emergency.

He finds himself a reluctant surrogate dad to his teenage nephew and forced to face up to earlier tragic events in the town which changed him forever and forced him to leave.

Affleck is up for an acting Oscar and he has a good shout for victory in that category as does the original screenplay which was also written by the film’s highly rated director Kenneth Lonergan.

It’s not for everyone, and bizarrely one couple walked out of the screening I was in after just 20 minutes, but whose who remained were rewarded with a grown-up film which addressed some very serious issues.

I thought the story was completely engaging and I left the cinema wanting to to see more.

Finally, one film I feel is deserving of a mention is Arrival.

Arrival is thoughtful science fiction about a professor of linguistics, played by Amy Adams, trying to communicate with aliens who arrive in 12 locations around Earth.

There’s a predictable range of reactions around the world as time begins to run out but Arrival is a refreshingly positive film in a less hopeful world.

It’s definitely not an Independence Day style action film but it’s certainly one that will improve with a second viewing just to appreciate the concepts within.