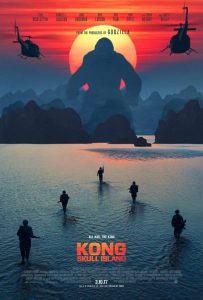 Set in a period at the end of the Vietnam war in 1973, this film is littered with references to one of the greatest Vietnam war films made – Apocalyse Now – and juxtaposes the themes we find there with the classic monster movie genre.

Right down to the Apocalypse Now style film poster this film is unashamedly a B-movie with a A-list budget which isn’t afraid to have a little fun along with the viewer  – and why wouldn’t you have fun with some top 70s tunes if your film is set in a classic year for music?

The first line in this movie is: “There’ll never be a more messed up time in Washington.” – a seemingly prescient line given the state of affairs in the modern world.

It’s not the only sharp line in the movie as the dialogue rises above the usual risible standard expected in these kinds of films while remaining under the radar when the fists and bullets start flying.

We have a stellar cast from Tom Hiddleston as an SAS officer with ability in tracking, Samuel L Jackson as an Army officer who is disappointed to be sent home after not being given a chance to help win the Vietnam war, Brie Larson as a plucky photo journalist, John Goodman as the head of MONARCH, an organisation which is convinced that monsters exist.

There’s excellent support by John C Reilly as a pilot who has spent 28 years on the island after being shot down there during World War 2 plus a number of minor blink-and-miss them characters supporting the action.

The only character name of interest here is James Conrad – the name of Hiddleston’s character – which appears to be a nod towards Joseph Conrad – the author of the story that eventually became Apocalypse Now.

It’s another sign of cine-literate writing and alongside the reference to the MONARCH company from the 2014 Godzilla film brings that film into the same universe.

Unusually in a modern action film there’s plenty of time for reflection between action set pieces although the humans barely get to become much more than cyphers before we see more of a richly realised world in which Kong is most definitely not the only piece of megafauna.

There’s so much to see in the lush surroundings of Skull Island, with some stunning cinematography showing off some great landscapes from location shooting in Vietnam and Hawaii.

You don’t have to wait long to see where the rest of the money has gone, though, with Kong given an early introduction and plenty of other things to see on screen while the human obsession with winning a war is lampshaded all too clearly with the spectre of Vietnam writ large at points throughout the film.

Going back to the classic B-movies of the 1950s I’ve always enjoyed these movies, with army men bickering with civilians about the best way to fight (or not fight) the big bad before the ‘good guys’ win out in the end.

Kong is no exception and although the final reel wraps up the action neatly, the film wastes no time getting you there and you will find a certain amount of satisfaction in a short coda at the end.

If you can wait ten more minutes until the full credits are finished you’ll be treated to a post-credits scene which teases a future encounter with yet more movie monsters as, yes, Warner Brothers appear keen to create another cinematic universe.

Some of the expected movie monsters hinted at may already be too recent in the memory but it’s a good sign that I am not expecting the resulting films to be too cheesy based on my enjoyment of Kong.

Summary: KONG: SKULL ISLAND is a US fantasy adventure in which a team of scientists and soldiers explore an uncharted island in the South Pacific.