Hard to explain Boss Baby has imagination but lacks charm 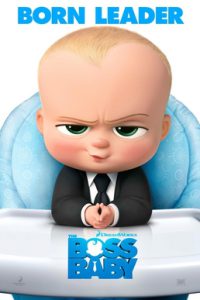 Wrapped up in a hard to explain plot, The Boss Baby is a colourful animated film that’s liberally littered with modern references for grown ups as most Dreamworks animated films are.

It’s actually based on a 2010 children’s book of the same name by Marla Frazee but obviously with such thin source material to go on the writers have crafted a story within a world curiously absent of technology newer than the 1970s, giving it a glossy timeless feel.

Tim is a happy and imaginative boy of around seven years old who resents the arrival of a younger brother who dominates the time and love of his parents.

This baby also curiously arrives with a business suit and carrying a briefcase (you’ll have to have read the book to understand) and behaves even stranger even though Tim’s parents don’t seem to notice.

There follows a plot which veers off in different directions which will certainly tie grown-ups in knots but seemed to keep the younger viewers in my screening mostly quiet although perhaps not because they were engrossed.

Families with kids and infants will get the most from this film although the majority of the laughs for the youngsters will come from the slapstick and toilet humour along with some comedic set pieces.

The few good moments, however, only served to highlight how most of the film failed to excite the kids in the screening I was in – one of them even said: “boring” in an echo of one of the scenes in the film.

Plenty of imagination in The Boss Baby; but plot is hard to explain and confusing

Far more could have been made of Tim’s fertile imagination as he tries to deal with the introduction of a new family member and later engages with Boss Baby in a series of fantastical 2D animated scenes showcasing some of the things we’d like to think happy kids get up to in an ideal childhood.

Instead, we get the inevitable chase sequences, nick of time rescues, and a plot line that may offend sensitive dog lovers while confusing just about everyone else old enough to have kids.

It’s typical for animated films from certain studios to slip in lines to amuse grown-ups and fans of Alec Baldwin will surely like his take on Boss Baby himself, in particular a call-back to one of his most iconic roles in Glengarry Glen Ross although fans of his character on 30 Rock will recognise a lot of him in this.

It’s therefore easy to dismiss The Boss Baby as missing the target of entertaining a family when this year’s Sing is a far superior film admittedly for slightly older kids.

This film will pass the time for kids but won’t do much for anyone else.

Summary: THE BABY BOSS is an animation in which a young boy and his new baby brother team up to defeat an evil businessman.