A fine performance by Gemma Arterton in Their Finest 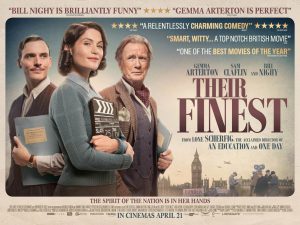 Based on the book Their Finest Hour and a Half by Lissa Evans, which was inspired by the real life story of screenwriter Diana Morgan, this film stars Gemma Arterton, Bill Nighy and Sam Claflin as the three main stars in this period drama with comic and romantic moments.

Directed by Lone Scherfig (An Education, One Day), Their Finest observes the role of women during the Blitz in World War 2 in Britain, but specifically the British film industry with an interesting insight into the way films were made during wartime.

Three things immediately contrast the period with that of today: a female advertising copywriter employed to write what is called “slop” – dialogue spoken by female characters in films, women not taken seriously in the workplace, and the casual acceptance of a pay gap for women.

The film also takes care to show the role of women in a dangerous London under the shadow of the Blitz, pulling no punches in what was a deadly time to be in the capital.

The film opens with the Ministry of Information seeking to make a film to keep morale up in wartime Britain and commissioning a film about a story set during the Dunkirk Evacuation.

Arterton delivers a nuanced performance as Mrs Catrin Cole, a Welsh woman who applies for a job at the Ministry, who has a particular talent for writing dialogue in screenplays and is teamed up with Sam Claflin’s acidic head writer Tom Buckley.

Cole has an struggling artist husband, Ellis, who is played by Jack Huston, but she inevitably finds herself drawn towards Buckley.

It all sounds so formulaic but you can’t help going along with it after being entertained by the drama behind the making of the film-within-a-film production.

Irons in particular does have a fine if slightly unusual take on a very famous soliloquy from Henry V but the clear winner in the performance stakes is Arterton’s co-star Bill Nighy (as washed up actor Ambrose Hilliard) who effortlessly steals every scene he’s in to comic effect as a pompous and deluded ageing actor who can’t accept that he’s no longer a romantic lead.

It takes all the charm of Cole to persuade Hilliard to perform in the film but it’s also evident that the Cole’s talent is in sharpening up the dialogue and improving the script to make the film a success despite having to juggle work on the film with trying to support her husband.

Despite the presence of Nighy (you’ll enjoy his singing!) this isn’t a formulaic sugary romantic tale, and the drama seems destined to finish the way you’d expect before fate takes a different turn.

Their Finest ends up a superior and moving drama, very easy to engage with, and well worth two hours of your time.

Summary: THEIR FINEST is a UK romantic drama about a team who are commissioned to make a propaganda film during World War II.