Jumanji: Welcome to the jungle is an unchallenging and humorous update of a forgotten film which is aimed at a video gamer audience

Just when you thought undemanding fun was to be had in Star Wars: The Last Jedi, there’s another option at the cinema which dares to take on the might of Lucasfilm this Christmas in Jumanji: Welcome to the Jungle. 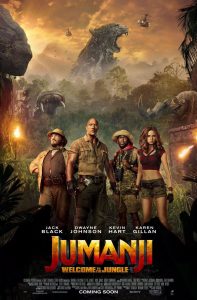 There’s precious few links with the original Robin Williams film from over 20 years ago which few people will remember properly but you needn’t worry as Welcome to the Jungle is a formulaic action comedy with fantasy gaming overtones which is aimed squarely at a younger market.

Starring an effortlessly funny Dwayne Johnson, a hilarious Kevin Hart, a feisty Karen Gillan and with a fine comedic performance by Jack Black, they play video game characters being driven by our high school heroes who start the film very much in Breakfast Club mode.

Our heroes are thrown together in detention – very generically pigeonholed in their archetypes as jock, brain, princess, and cynic – who are then drawn into the mysterious world of Jumanji in a very hackneyed plot twist.

They are forced to take on roles which are exactly the opposite of their real world personas and have to co-operate in order to escape the increasingly challenging ‘levels’ within the game of Jumanji which plays out like a vintage 1980s console game.

Jumanji: Welcome to the Jungle is funny, decently written, but unchallenging

Instead of battling cgi beasties all the way, through, the villains appear to be generic anonymous bad guys with guns, with a hissable leader in Bobby Cannavale but the pacing is almost derailed by the wooden appearance of a guest star as it begins to gather pace towards the end. It’s a pity as the material would have worked in the hands of another seasoned comedy performer.

There’s enough laughs to keep you entertained, moreso if you like the video gamer tropes – but there’s also room for a little character development by the numbers too – something Gillan and Black do particularly well – while Johnson and Hart are left to do the shameless mugging to camera which is amusing.

The world of Jumanji has been well thought out and plenty of money has been spent on the effects budget and the script, while simplistic, isn’t stupid and importantly (unlike a certain other film out right now) the humour isn’t forced. It’s just a pity that some of the jokes were slightly risqué – justifying the rating – when it might have made a great family adventure.

The audience in my screening fit the target demographic well so there was plenty of laughter at some of the scenes so I wouldn’t be surprised if this film was a success.

Summary: JUMANJI: WELCOME TO THE JUNGLE is a US fantasy action adventure comedy in which four high school students are drawn into the jungle setting of a video game.

Rating: *** (Unchallenging and humorous update of a forgotten film, video gamers will like it more than most)