Star Wars: The Last Jedi is a bit baggy but still an enjoyable Star Wars episode with original ideas 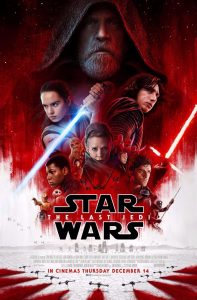 “This is not going to go the way you think it is” is a phrase spoken during Star Wars: The Last Jedi, and Star Wars fans may have expected some mining of one of arguably the most popular and best episodes of the series – The Empire Strikes Back – after comparisons were made between The Force Awakens and the original Star Wars (A New Hope).

As expected, though, the Resistance are on the back foot in The Last Jedi, being hunted down by The First Order, remnants of the Empire who have huge resources despite their setback during The Force Awakens.

Rey (Daisy Ridley), Finn (John Boyega), and Poe Dameron (Oscar Isaac) are back as members of the Resistance and we also get to see more of Luke Skywalker (Mark Hamill) who was found at the conclusion of The Force Awakens plus the final performance of Carrie Fisher as General Leia Organa.

Our heroes are split up and take on different quests as the decimated Resistance fighters try to escape impending doom from a chasing First Order fleet.

One of the more important storylines brought up are the effects of the war on different social classes and business interests within the Star Wars galaxy. This was touched upon in last year’s Rogue One but it’s expanded here during one of the slightly overlong but important subplots.

Inevitably comparisons are going to be made with Empire Strikes Back and The Return of the Jedi but one new factor in writer/director Rian Johnson’s Last Jedi screenplay is the humour.

It’s not Guardians of the Galaxy level banter but it’s certainly a notable divergence from ‘traditional’ Star Wars screenplays giving some of the characters some great moments even though there’s an increased danger of subverting the dramatic impact of certain scenes in the film.

Johnson finds refreshingly original and inventive ways to approach battle and action scenes in the Star Wars universe which goes some way towards making The Last Jedi more unique.

Unfortunately, there’s too little screen time for some of the characters considering how their scenes play out even in a script that luxuriates in the longest running time for any Star Wars film.

With two and a half hours to play through and different plots and locations to keep going it does start to look a little like a Lord of the Rings type adventure during a baggy middle section.

Individually the separate storylines borrow a little from themes from Rogue One but perhaps lacking a final script pass which might have made The Last Jedi an overall tighter film or one with a greater impact during some emotional moments.

There are, though, a number of scenes in The Last Jedi that could be considered cynical marketing for toys or cheap comic relief (although admittedly they were funny) but I was only taken out of the film by one CGI scene which seemed to be riffing on a serious moment from Guardians of the Galaxy but failed to connect for me.

Structurally, some parts of the film see characters and plot directions sidelined or shifted in unexpected directions to service other plot lines, which is a shame.

Thankfully, after a slow middle section where our heroes each get their moment in the sun, they are brought back together for the inevitable finale and it’s a great looking final battle with unique environmental visuals culminating in a very touching set of final scenes.

Summary: THE LAST JEDI is a sci-fi action adventure in which a young woman seeks to learn the ways of the Force and help the Resistance battle the evil First Order.