Three Billboards outside Ebbing, Missouri contains strong performances all round and a compelling story 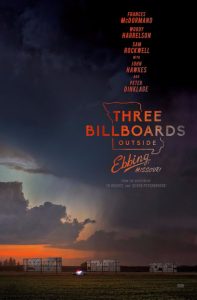 At one point during Three Billboards in Ebbing, Missouri, a character says “anger begets greater anger”. It might sound like a cheap bit of pop-wisdom, and in fact it is in the context of this film, but that insight serves as a turning point for one of the film’s characters, Or does it?

“Three Billboards in Ebbing, Missouri” is the fourth film written and directed by British playwright and director Martin McDonagh following Six Shooter (2004), In Bruges (2008), and Seven Psychopaths (2012) – he also produced The Guard (2011).

McDonagh’s film is about guilt, loss, and upsetting an unsatisfactory status quo in an attempt to make a change or get results.

Mildred Hayes is one person seeking such results when she decides to rent space on bill boards outside of her home town of Ebbing after seven months have passed without any results from the Sheriff’s investigation – the case has gone cold and the pain for Mildred’s family is palpable.

In tall black lettering on a red canvas the billboards consecutively read: “Raped While Dying”, “Still no arrests?”, “How Come, Chief Willoughby?” – and it’s not long before the media catches up and starts to exert more pressure on the police.

Upsetting the apple-cart riles up the town folk and there’s soon a tit-for-tat battle as the sharp-tongued Hayes locks horns with various members of the community including Willoughby and Dixon but the supporting characters in the escalating tensions serve to illustrate just how far the grieving mum is going to go in search of justice.

Hayes find supporters as well enemies amongst the inhabitants of Ebbing as she tussles with Chief Willoughby, who is preoccupied with tragedy of his own, and Officer Dixon who goes on a dramatic journey with Sam Rockwell effortlessly providing many of the outstanding blackly comedic moments to be had.

In fact, McDonagh imbues every character we meet with depth, motivation, even whimsy, and certainly a sense of danger even though many of the encounters feel like isolated scenes from a play – a very intense play – involving some seriously good supporting performances from the likes of Zelkjo Ivanek, Clarke Peters and Peter Dinklage among others.

The plot even keeps you guessing with a couple of twists and changes of tone over the usual dramatic routes you might expect a film like this to take but the story remains compelling despite a little artifice.

Three Billboards defies any suggestion of a easy finale or a neatly wrapped-up package, although what we do get is an open sense of interpretation that leaves you thinking after the finale.

It’s so good, in fact, that it’s been recognised at last night’s Golden Globes with drama acting awards for McDormand and Rockwell plus nods for best drama screenplay and best film (drama) as well.

Summary: THREE BILLBOARDS OUTSIDE EBBING, MISSOURI is a darkly comic crime drama in which a woman pressures the police into continuing the investigation into her daughter’s murder.

Rating: ***** (Three Billboards outside Ebbing, Missouri contains strong performances all round and a compelling story)