From the James Bond pastiche opening credits to the mid credits end scenes, Deadpool 2 really hits the mark with a series of in-jokes and one off cameos which have to be seen first time for best impact in and amongst a sequel that will please fans of the first film. 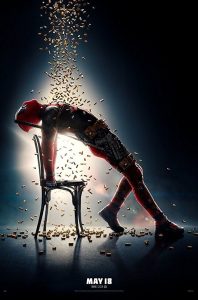 Even though it’s a Deadpool movie and we can expect plenty of Ryan Reynolds as the titular character there are good parts for supporting stars Josh Brolin (as Cable) with an honourable mention to Zazie Beetz as the spectacularly lucky Domino although it was disappointing to find that Morena Baccarin and Brianna Hildebrand (Deadpool’s girlfriend Vanessa, and Negasonic Teenage Warhead) had smaller roles this time around.

Following on from the surprise hit of the first movie, Deadpool 2 has been handed a bigger budget, some better special effects, and a surprisingly serious line in action sequences and comedy moments with an unexpected sprinkling of pathos even though there is the usual third act finale along with few surprises.

After a massive life-changing event, Deadpool resolves to change for the future but comes up against a time travelling cyborg super-soldier in Cable who has come from the future to kill a young troubled mutant boy who is having difficulty managing his adolescent feelings but more pertinently will go on to become a mass murdering villain in the future.

Deadpool remains his snarky adult-rated self, even after he gets involved in a serious storyline with pathos in this sequel and briefly joins the X-Men before forming his own team, named X-Force.

For all the potty-mouthed dialogue and raunchy scenes, Deadpool 2 almost falls into its own trap, providing some kinetic action (or adult) scenes at well chosen moments of a sort that the original film would have mercilessly torn into but it turns out at our hero was just teasing us all along.

The audience I was in was fully aware of many of these gags and the cinema screening was filled with laughter from many in the audience as they saw cameos they liked and enjoyed the snarky on-liners about super-hero tropes.

Deadpool 2’s storyline is brave, taking in some adult themes and pathos and throwing it into Deadpool’s court to be deconstructed, while all the time allowing for the usual Deadpool stylistic tricks such as breaking the fourth wall, real world mickey taking of Ryan Reynolds, and the X-Men pocket universe before it gets potentially absorbed into the Marvel Cinematic Universe,

It’s the serious storyline that hides a theme that X-Men comic books would normally have dealt with but there’s little need to worry here as Deadpool deals with the situation in his own inimitable fashion even if his own particular set of powers could serve to undermine the emotional impact of events at the end of the film.

There are three end credits scenes in the middle of the end credits but rather than teasing future films they will please the hard core comic book movie fans in the audience while remaining superficially funny.

Summary: DEADPOOL 2 is a US action adventure in which a superhero finds new purpose when he assembles a team to rescue a young mutant.

Rating: **** (Deadpool turns up the snark to 11 while kicking off the summer blockbuster season)