The dark wizard Grindelwald has escaped from prison and is threatening a fascist world war against Muggles (non magic users) but while he is gathering an army, efforts begin to try and stop him. 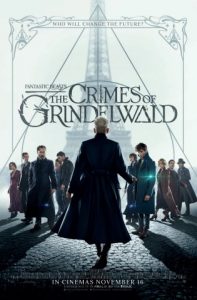 The four main protagonists from the first film (Newt Scamander, Tina and Queenie Goldstein, and Jacob Kowalski) are back but the huge and diverse cast list means that everyone gets short changed for screen time which diminishes the overall film.

Eddie Redmayne as Newt, in particular, seems a little short changed as he awkwardly stumbles through the film pining after Tina (Katherine Waterston), while Jacob Kowalski (Dan Fogler, one of the highlights of the first film) and Queenie (Alison Sudol) have their own relationship difficulties.

There was a big fanfare in the original casting announcements regarding the diversity of the supporting cast but unfortunately most of them get little to do.

Zoe Kravitz makes the most of her time as Leta Lestrange even though her storyline seems far fetched even by fantasy standards while Nagini (Claudia Kim) and Credence (Ezra Miller) add little to the plot.

Jude Law and Jonny Depp are just two of the actors who are given little more than extended cameos, although while Depp veers towards scenery chewing fascist villainy as the titular Grindelwald, Law leaves us wanting more with his charismatic portrayal of legendary wizard Dumbledore.

And while there’s plenty of money on the screen with some superb visual effects, there’s altogether too much telling and not enough showing in the film.

There’s fewer beasts in this than the first film but they play key parts in the film but this time they seem like distractions from the plot.

All of this is leading up to a big reveal but, the overly dense plotting hasn’t transferred well onto the silver screen and a lot of the impact is lost in a film that feels like it’s been badly trimmed down from an overly literary source.

This film feels like a long set-up for forthcoming sequels and an inevitable showdown between Dumbledore and Grindelwald.

There’s too much plot exposition and history lessons going on and not enough thrills and spills – and this leads to a lack of believability in the motivations of some of the characters in the third act.

There’s supposed to be five films in this series and while the box office will probably be massive from all the Harry Potters fans looking for a fresh instalment from the Wizarding World – J.K. Rowling may need to ask for help to give the remaining three films a more cinematic feel.

Summary: FANTASTIC BEASTS: THE CRIMES OF GRINDELWALD is a fantasy adventure film in which a dark wizard hatches a plan to subjugate all non-magical beings.

Rating: *** (Not a very cinematic story, but fans will lap it up)