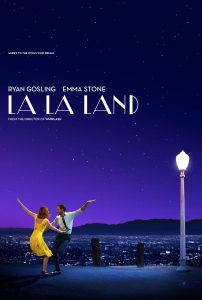 It’s already got a haul of seven Golden Globes, and with 11 nominations for the forthcoming BAFTAS and overwhelming buzz for the Oscars, La La Land looks set to be rewarded well for being a love letter to a half forgotten Hollywood golden age.

If it wins more recognition for writer/director Damien Chazelle (Whiplash, 2014), it will be fully deserved for a musical that stands up well against its more polished Hollywood predecessors and is the perfect tonic for anyone who has had a tough 2016.

You can see that La La Land is a musical from the very start but the bright primary colours and song and dance numbers give way to a more intimate and dramatic second half as Mia (Emma Stone, Amazing Spiderman) and Seb (Ryan Gosling, Gangster Squad) meet and develop their careers and things become more complicated.

Mia is an aspiring actress and playwright who works in the coffee shop on the Warner Brothers lot, while Seb is a jazz pianist with strong opinions on the genre who wants to own his own traditional jazz club. Their romantic story is certainly fresh enough to keep the audience engaged in the story.

The musical numbers were kept simple – it’s no “Singin’ in the Rain” – but will still entertain fans of Strictly Come Dancing. It’s a fine achievement for Gosling in particular to have also learned enough piano to look convincing on screen during the film’s many long takes. 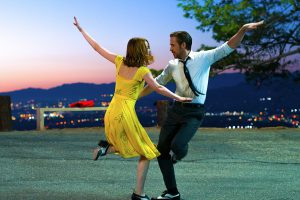 The two main leads have worked together on earlier films and their chemistry really shows, with Stone giving easily becoming the emotional centre to the film. Scenes of her struggling through auditions will surely strike a chord amongst fellow actors.

Gosling offers a laid back and nuanced performance, culminating in a wistful smile at the end of one final sequence which underlined the emotional journey that both leads go on.

Los Angeles is painted in a very nostalgic light, with the historic Griffith Observatory and starlight being a key location in the storyline with moonlit street lamps and the setting sun offering a dream-like view of the City.

Disney’s Moana probably has more catchier songs, but Stone and Gosling really invest you in the story and deft direction and editing in between the musical numbers build up to an emotional denouement.

To sum up, then, this film is one for the dreamers out there and a second viewing is recommended just to appreciate the build-up to the final act pay-off.

Summary: LA LA LAND is a musical comedy about the relationship between a jazz musician and an aspiring playwright.