Fast and furious 8 is also funny, but oddly lightweight 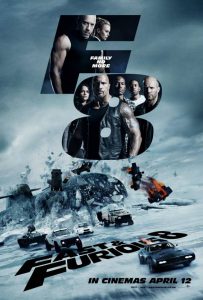 I remember watching the original The Fast and The Furious way back in 2001. Back then it was dismissed as a pale copy of Keanu Reeves’ Point Break (1991) despite being inspired by a magazine article by Ken Li in Vibe magazine way back in 1998 about street racing.

In the meantime, I didn’t get round to seeing any of the other instalments but have heard about the cast additions (notably ex-wrestler Dwayne “The Rock” Johnson and British action star Jason Statham) and plotlines that are as far removed from the far simpler original as you could get.

The previous film, Furious 7, had to be completed with the help of CGI and stand-ins after star Paul Walker died in a car crash involving a Porsche he was in at the time.

Walker was given a respectful exit from the series but he’s also name checked and excused elegantly in the latest big budget film in the series.

Scott Eastwood effectively takes Walker’s place as the token law enforcement officer in the eclectic team of drivers but he is left with little screen time.

This film is nowhere near the stripped down sensibilities of the first film – it’s much more reliant on CGI – so there’s no point trying to compare the escalating car chases with a more grounded film like John Frankenheimer’s Ronin (1998) or even various entries in the Jason Bourne film series.

Fast & Furious 8 is another ensemble piece with with pleasingly good script for newcomers but let’s overlook the increasingly fantastical elements later in the film and the less said about inter-film continuity the better.

Family and humour the big themes in Fast & Furious 8

At least the series has a clear theme – family – and with some genuine star charisma from the aforementioned Johnson and Statham and comic relief from returning stars including Tyrese Gibson it’s obvious this film is here to entertain rather than thrill.

The sense of humour struck a chord with the mainly young crowd of filmgoers I was watching alongside but if you can overlook the slightly ropey CGI there are some original action sequences to enjoy alongside the wit even if the film gives up any pretence of reality – or in fact threat to life – after the opening sequence in Cuba.

Being a huge ensemble cast few of the members gets enough screen time while the director F. Gary Gray (Straight Outta Compton) just about managed to get something out of each actor including a memorable cameo for Helen Mirren.

He can do character stuff just fine but the action stuff is just a little bit too heavy on the fast cutting which makes too many of the action scenes jumpy and somewhat confusing – no doubt due in part to the need to appeal to younger viewers.

One segment of the finale, when it comes, takes heavy inspiration from superior John Woo action films such as Hard Boiled and Face/Off but exposing it, or the rest of the film, to harsh comparison would be unfair given that a 12A certificate was the aim for this film.

And given that the cast includes Charlize Theron as uber-baddie hacker Cipher the less said about a ice-based set piece the better – she’s been in the much better Mad Max: Fury Road as Furiosa and doesn’t do a lot in this film apart from pose and pout lines abut Fate.

Nitpicky folks who know the Furious series should also probably ignore the increasingly contrived series continuity and enjoy the ride along with the rest of the newcomers.

Summary: FAST AND FURIOUS 8 is the latest addition to the US action franchise, in which Dom is drawn back into the world of crime by a high-tech criminal called Cipher.